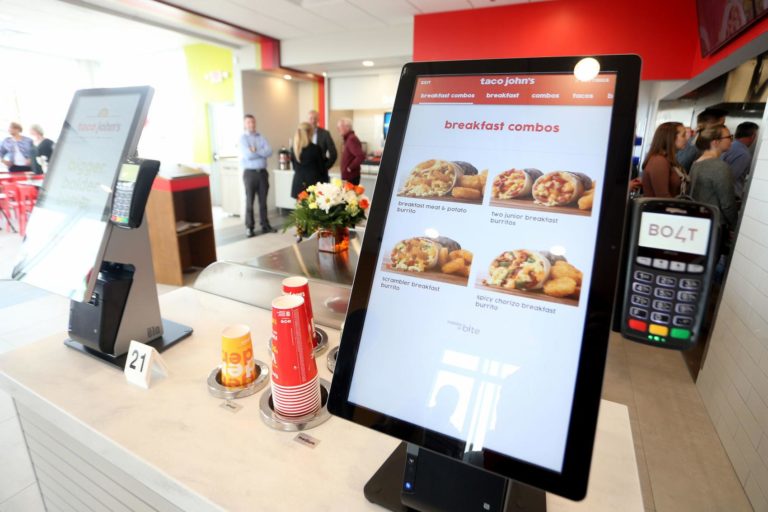 In an “aggressive” growth initiative, the Cheyenne-based fast-food chain is aiming to increase the number of new stores, remodel existing stores to match the new branding and capitalize on more franchising opportunities.

Three years ago, Taco John’s executives took a good, hard look at where the company was headed and where they wanted to go in the future. Knowing that growth was the end goal, Taco John’s staff began working on different pieces of the puzzle – branding, store design and expanding corporate offices.

Last October, the first new Taco John’s restaurant opened on South Greeley Highway, complete with a sleek look that ties in the company’s updated logo and contemporary branding. New menu items were rolled out in Cheyenne in preparation for them to go national.

And a satellite franchise support center location was opened in Minneapolis to be closer to more than 200 Taco John’s locations in the Midwest.

“Everything we were doing was getting ready to grow the chain,” President and CEO Jim Creel said.

In recent years, the number of Taco John’s locations has remained stagnant at around 400, with eight to 10 new stores opening and the same number closing each year. By increasing locations at truck stops and travel plazas, and focusing on recruiting experienced franchisees to run new operations, Taco John’s hopes to increase the number of stores in the near future.

The goal is to open between 15 and 20 new stores this year and between 20 and 25 next year. And the Taco John’s Board of Directors added three new members to help do just that.

“In the past, our board has been mostly a family board,” Creel said.

But when company executives discussed what they wanted for the future of Taco John’s, they thought it best to bring in some seasoned industry professionals who have succeeded at large companies like Wendy’s and McDonald’s.

Greg Haggis, Scott Weisberg and Les Karel joined the board earlier this year, which Creel said is “huge.”

“We’re bringing in industry professionals because they’ll be able to bring outside perspective on what we need to do to continue to grow,” Creel said.

Their expertise and contacts in the industry will be especially helpful as Taco John’s targets successful franchise owners of other brands who have maxed out. Oftentimes, a franchise owner controls a number of the same franchises in one area, but there’s a limit to the demand for a particular store.

If those already successful owners open Taco John’s franchises, there will be a higher likelihood for success. Having professionals on the board who have been immersed in the industry for decades is an essential part of that process.

And while Taco John’s is facing a number of changes company-wide and preparing to grow even bigger, Creel said there’s one thing local residents have nothing to worry about.