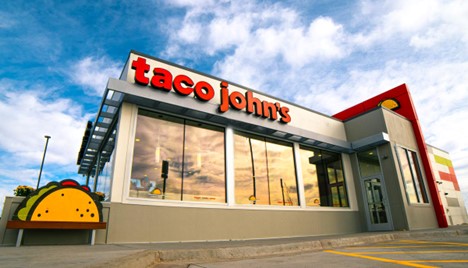 At 370 restaurants in 23 states and counting, Taco John’s is laying the groundwork to quickly expand outside its Western roots into Eastern and Southern states.

After 53 years, Taco John’s is building momentum for massive growth with a new restaurant support center and test kitchen in Minneapolis.

When Taco John’s hit the 50-year benchmark in 2019, CEO Jim Creel knew it was time to take a step back, reevaluate, and make a few changes to better position the brand for future growth.

Founded as a small taco stand in Cheyenne, Wyoming in 1969, Taco John’s has grown to 370 restaurants in 23 states across the U.S., and hit $410 million in systemwide sales last year. As Creel considered the brand’s ambitious expansion plans, he began to question if Cheyenne—a small Western city with a population just north of 65,000—was the right place for Taco John’s headquarters, or if the chain needed a second office in a different location.

Since Minnesota contains the highest concentration of Taco John’s stores, it made sense as a perfect jumping off point as the brand looks to expand to the East and South, says Barry Westrum, chief marketing officer at Taco John’s. Plus, the opportunity to recruit highly-experienced executives from around the Twin Cities became a primary driver in the brand’s decision to build a new restaurant support center, test kitchen, and sensory testing lab in St. Louis Park, a suburb of Minneapolis.

While Taco John’s human resources, legal, and accounting departments are still based in Cheyenne, the marketing, operations, finance, training, and supply chain teams all moved to Minneapolis in 2019, initially working out of a WeWork space while the new office—an old General Mills packaging facility—was being renovated.

“We’ll always have a presence in Cheyenne. It’s the roots and history of the brand, and we’ll never want to lose that,” Westrum says, adding that Taco John’s will continue to operate the five corporate-owned stores around Cheyenne.

“We’re trying to raise awareness of who we are and where we’re going,” says Creel, who joined Taco John’s in 2000 and was named president and CEO in August 2016. “Opening this office in Minneapolis was a big deal for us, and helps us with potential franchisees as well as existing franchisees. Within six hours of Minneapolis is about half the chain, so it’s a central area for us.”

Two new corporate stores are slated to open in the Twin Cities in Burnsville and Eagan by the end of 2022 as part of the chain’s return to development in the area.

“If we’re going to have our support center here, the ability to have corporate stores in town where we can test new policies, procedures, products, etc. is a big opportunity, so that’s why we’re here,” Westrum notes.

The sensory testing lab is also a chance for Taco John’s to bring research in-house and directly interact and receive feedback from consumers. The dimly-lit room features a modern take on cubicles, and the space turns red when Westrum hits a button—meant to neutralize peoples’ senses to help them make more discerning taste identifications, he says.

“You don’t eat with your eyes, right; so when you really want to isolate the taste variable, we use this lighting,” Westrum says. Each tester fills out a questionnaire for a number of different products over the course of an hour. Another button is hit to alert the kitchen team when a tester is ready for a new food item, which is then served through a small door resembling a package drop box. Doing analysis in-house allows Taco John’s quicker access to the data, plus cuts down on some of the costs of outsourcing that research.

Taco John’s picked Minneapolis as the base for its new restaurant support center, test kitchen, and sensory testing lab—which officially opened in October.

Taco John’s marketing, operations, finance, training, and supply chain teams all moved to its second base in Minneapolis, while the brand’s human resources, legal, and accounting departments remain in Cheyenne, Wyoming.

“We went through a rebrand with Arby’s about 10 years ago, and it dawned on me sitting here today, one thing we were told by an agency was that we were hiding in plain sight,” Kocer says—and the same could be said for Taco John’s.

That’s why the brand underwent a massive rebranding effort in 2019 with a new restaurant prototype design in an effort to fully embrace its new tagline, “bigger, bolder, better,” created with the help of Adrienne Weiss’s brand development team.

After introducing the remodel program to the Taco John’s system in 2020, the new image brought a double-digit increase in sales, according to Creel, and about 75 percent of restaurants in the system now feature the sleek look and design. The brand’s top 25 percent of units reached $1.51 million in average unit volumes after rolling out the updated design.

Drive-thru business represents about 65 percent of systemwide sales at Taco John’s, and during the pandemic, the brand began opening drive-thru-only models—a few of which outperformed the chain’s average AUVs. Over the next three to four years, Creel estimates another 40 drive-thru-only restaurants will open, filling in existing markets. And simply having a drive-thru model shielded the brand from some pandemic-related challenges, and in turn, helped to attract new prospective brand partners.

The rebrand, coupled with a new focus on recruiting multi-unit franchisees aiming to develop new markets, led to the largest franchise agreement in Taco John’s history: a 50-unit deal with Meritage Hospitality Group, the largest franchisee of Wendy’s, in August 2021. Per the agreement, Meritage will build the new restaurants by March 2026 in Michigan and Ohio, with the option to develop an additional 150 restaurants.

“Bringing in a quality franchisee like that is really going to help the brand,” Creel says. “Today, we’ve got a lot of 10, 15, 20, and 30-store franchisees, and I see that being the trend going forward.”

While Taco John’s historically has had a lot of single unit operators, the deal with Meritage opened the brand up to the eyes of other multi-unit, multi-brand operators—such as an operator in Boston, who signed to open 22 stores. To capitalize on its time in the spotlight, the brand began offering three years of reduced loyalties for any new multi-unit franchisee who agreed to open five or more stores in 2021. The initiative also included $10,000 in dedicated marketing funds to spend within 120 days of opening each store.

The aggressive incentive offer paid off. Over the next four years, approximately 120 Taco John’s stores are slated to open—which is the largest development pipeline the brand has ever had, Creel reveals.

“We hired consultants to help us in 2017 and 2018, and like Popeyes, everyone thought they reinvented themselves overnight when they became so popular. The truth is, it was five to six years they spent getting up to that point,” Creel says. “We’re at that five-year point, and I think for us it’s going to happen, and they’ll think we did it overnight.”

Earlier this year, Taco John’s also launched its new points-based loyalty program, in which customers earn 10 points per every dollar spent, and earn their first reward at 100 points. Guests previously had to visit a Taco John’s a certain number of times before earning rewards, so the new program gives customers some much-desired immediate gratification.

“I think it’ll go a long way for driving frequency for the brand,” Westrum says, and the swap has already paid off. The brand experienced a whopping 30 percent increase in consumer transactions where guests are earning or redeeming points since implementing the new program, he notes.

“We’re very excited about the brand position in the sense that more and more consumers are desiring Latin-inspired foods, particularly younger consumers, and Mexican quick-serve is growing,” Westrum adds.

“Our brand position is a higher-quality quick-service, or a cheaper, faster, fast casual. It has merit all across the country, and I think we’re in a very advantageous brand position to enable growth going forward, and all the data in the world supports that.”